How to preserve the time? 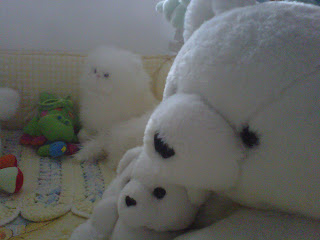 I had a full and beautiful nine hour sleep last night and upon waking was delighted to sit in bed and feel you moving. You slept through the night with me, and this morning I notice again how your movements are softer and lighter. You are preparing to be born. I rub the oil on my belly and smile, feeling you there, knowing the time separating our meeting is evaporating. I want to catch it and put it in a bottle so that later I can re-visit it in my memory and perhaps this is what I am trying to do with words. I cry because I know that once you leave my womb - you will never go back. You are my gift. My baby, while I have carried you in my womb I have prayed for you and now as the time approaches for me to carry you in my arms the prayers on my lips will never fade away.
Posted by Ronda@islandmother at 10:03 No comments:

In traditional Sioux culture woman birthed alone or with a woman friend in a tipi. They squatted holding onto a cottonwood stick emersed in the earth. The baby was born on a tanned deerhide. They would cut the umbilical cord and put puffball powder on the baby's navel.

In Lakota Woman, Mary Crow Dog, a single mother chooses to birth her first born son with several older experienced Sioux women attending her. This is amidst the firefights going on between her people and the US government at Wounded Knee.

She refuses to go to the white man's hospital and finds courage to birth among her people. When the tiny cry is hear, "the women gave the high-pitched, trembling brave-heart yell. I looked out the window and I could see them, women and men standing there with their fists raised in the air, and I thought I had accomplished something for my people." pg. 163.

It's a moving account of a woman who birthed the way she wanted to. In all the traditional aboriginal accounts I have read woman birthed alone or with an older experienced woman. By our "modern current day" cultural expectation that "normal" means having the father present is this the right path for all woman? Is there a connection that as we have moved further from an earth-centred existence that we have lost something valuable that could be gained by claiming our own passage alone through rites such as birth?
Posted by Ronda@islandmother at 11:10 No comments:

The stack of pregnancy books by my nightside table is decreasing. My biggest gripe is they all have assumed you have a partner and that they will be there. The odd one will generously allocit a paragraph to the woman who plans to birth alone. However, each had something useful in it even if it was just a diagram or two.

The best was Mind over Labor by Carl Jones. He says, "  A woman in average physical condition who can relax will almost certainly have a less stressful labour than the most athletic woman who is tense."pg.47. He then discusses the how in practical terms while allowing differences for each woman.

The book I wanted to read but could not locate a library or a used copy is called Placenta: The Gift of Life. My midwife shared with me many benefits to be acquired by consuming the placenta and I found similar online sources as well. She recommended it in pill form. Being a vegetarian this will spare me from deciding do I want it medium-rare or well-done?
Posted by Ronda@islandmother at 07:04 No comments: 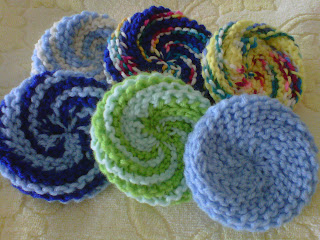 I knit these up last night for my knitting class. I was having fun as you can see!
Posted by Ronda@islandmother at 17:16 No comments:

to cute to cut! 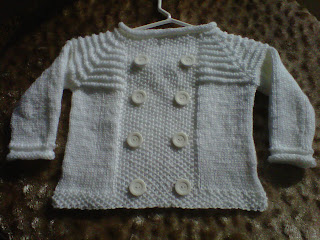 This was the acrylic baby sweater I was going to do the steek on but when I saw how cute it was with the buttons I thought better of it. O well. I will just knit another and steek it instead.  I am however undecided if this is unisex or if it is girlish??? I think it has a nautical feel to it and since it is for a 6 month old perhaps it is fine. What do you think?
Posted by Ronda@islandmother at 13:53 No comments:

I have given special consideration to how I want to spend the waning, precious remaining weeks of my pregnancy. All of the time has so far been one of preparation. First, the literal building of a nest, and now mental preparation.

This has led to a desire to create and perhaps this is part of my preparation now that I have the time. When I look back at my previous artwork I see that this passage is yet another layer to add onto what already exists. I find a certain energy in that like I am infusing a new, deeper power into my own existence which transcends into creativity.
Posted by Ronda@islandmother at 08:41 No comments:

The Netsilik Inuit live on the Arctic coast. Their name means, "people of the place where there is seal." They were nomadic hunters and sometimes spent several years on journeys to various destinations. In 1923, the explorer Rasmussen reported 259 of them and reported how the women birthed alone in a small igloo. She pushed on her knees and the baby was born in a small hollow in the snow.

I have never had the privilege of being in an igloo but to me it is suggestive of another type of womb within the earth. As I contemplated this what became obvious to me is the lack of connection between the modern birthing woman with nature. This brings a question to mind how did the primitive woman experience birthing and what can she teach us?
Posted by Ronda@islandmother at 20:14 No comments:

How to do a steek with acrylic yarn 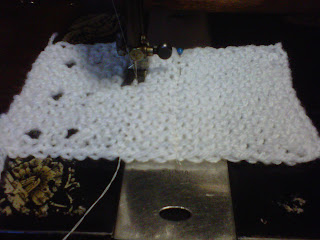 Here is my sample swatch. Notice the double set of button holes. When I fold the band back after it is cut they will fit symmetrically over top of each other. I used a tiny seam on my treadle sewing machine and sewed down twice on each band for a total of 4 seams. Then I cut but I will spare you that picture. You might flinch! hehee 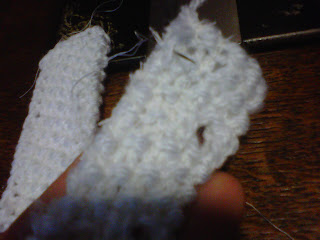 With thread I whipstitched the raw cut edge to the back of the band. I made certain my stitch began and ended on the secured machine sewn seam-line. 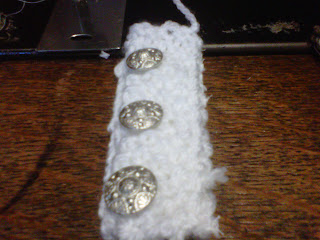 Now that I've finished the sample I've cast on for the cardigan again and it's time to try this on a garment.
Posted by Ronda@islandmother at 09:43 No comments:

I finished the super easy baby sweater and in case your wondering where the pattern is - it is somewhere between the real and the invisible world. I had a baby cardigan on my needles but have since unwound it. I'd gone an inch or two past the border before it reminded me of my purling distaste.

EZ in her book Knitter's Almanac has this to say. ".....I want to make my position clear. The avoidance of purling where possible has given me the reputation of hating it, which is not strictly true. Purling has its place, and a useful one. Without it, many beautiful stitch patterns would be impossible....however for many people purling is slower than knitting...one is happy to go to the trouble of purling, no matter how one performs it, when it has a function, and a pretty and visible effect but why purl it you don't have to?"

I have another gripe. My knitting is generally loose and my purling even looser. Should I really switch to smaller needles every second row? Talk about taking the j for joy out of knitting. If you have a similar problem it is most evident if you have ever knit a sweater in the round to the neck and then because it is a v or a crew neckline you switch to purling every second row. If your like me your knitting makes an obvious looser transition where the purling alternate rows begins. Grrrr. Of course what yarn you use can also enhance this undesirable effect. Wool is more forgiving and you can block it out but acrylic you cannot. And don't be one of those purists and tell me I should be avoiding acrylic. Acrylic like purling has its place. Unless you use the expensive superwash wool you are in trouble as the nice little gift you just spent hours on given to the non wool fan will end up either a shrunken disaster in the washing machine and if it survives there due to the luck of a cold water bath it will die of heatstroke in the dryer. Acrylic also takes good care of the the wool complainers but I have digressed. The long and short of it is I am making test swatches to determine how I will knit this acrylic cardigan in the round. Here's a little hint - the word begins with s. I can't possibly not sign off this morning before mentioning that as the earth is bathed in the premonitions of light the chickadees are singing!
Posted by Ronda@islandmother at 07:09 No comments:

This week my pregnancy calender advised me to pack my suitcase but even before I read this I've been contemplating what I should wear birthing. Personal accounts and pictures via the internet have revealed a wide sprectrum of choice. Many go nude (homebirths), some hospital gowns (hospital births), and in birthing rooms women are typically found in everything from nightgowns to tank tops to their partner's t-shirts. In today's age you wear whatever is your style or what you are "allowed" to by hospital policy.

So I've decided on black mary janes, black knee high socks and a little black, silky maternity dress that I look fantastic in. The way I see it every other event in my life has been celebrated in a dress - so there is no need to change my style. And of course I will put flowers in my hair. The only thing I won't be wearing is my underwear.
Posted by Ronda@islandmother at 08:56 No comments: