Firewood and my choice 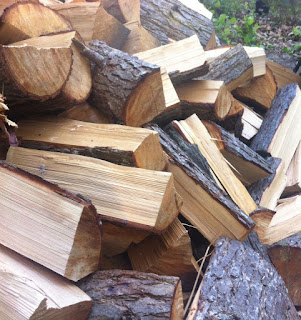 I always wondered what I would do when the last block of firewood was chopped. Would I lay down in the dirt around the sand castle's my daughter and I built and stare up at the treetops and sky? I didn't. Instead I sharpened and oiled my splitting maul and went to bed. I can't really show you all the firewood. At this point it is scattered in several heaps. Do I have enough for winter? I don't know but the wood is now split and drying in the summer heat. Speaking of summer I am reminded of the first summer I visited Mrs. N. It was early july and as I stood in her yard; I looked at the tall overgrown grass. "This is my meadow," the sprightly, elderly woman told me her face beaming and that's when I saw the wild flowers sprinkled like glitter in the grass. Perspective is everything. My perspective is something I can control no matter what the circumstances. By changing it I can change everything.
Sent from my iPhone
Posted by Ronda@islandmother at 06:14 10 comments:

A painted door and summer solstice 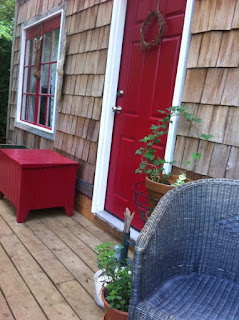 I don't really know when morning begins. I do know that sometime around 5 am when the little angel wakes up it is daylight. Half an hour later when I get up sunlight is sparkling and scattering the shadows in the trees along the edge of the yard. On summer solstice our sunrise was at 5:09 am. I love these long days where daylight stretches on like a sleeping cat. Over the past week I decided to spruce things up on my back deck with a bit of red paint. I used Victorian red by CIL. This is the same red as my windows. Red is the complementary colour to green and with the forest greenery all around I really like how it warms things up and makes the cabin sing. More than anything else it was something that needed to get done but I was pleasantly surprised at how much it brightened my spirit's. Sunset on solstice was at 9:30 p.m. At 10:00 p.m. it was still plenty light enough to take the scissors and cut a bouquet of flowers in the garden. As usual I didn't fall asleep until the last robin had fallen silent and the glowing gold of the longest day of the year had faded forever into the western sky.
Sent from my iPhone
Posted by Ronda@islandmother at 08:27 20 comments: 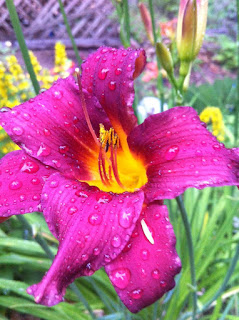 Dear God I love you. I know you are stronger than seven husband's and in reality I just need one - you. I trust you to lead me for you are as gentle with me as the whispering wings of a fluttering butterfly. Thank you for looking out for me. Thank you for giving me strength. You overwhelm me to tears with your caring heart when you see my need and you supply it before I ask. Before it become's a worry in my heart. "Does the rain have a father? Who fathers the drops of dew?" Job 38:28. Thank you Father, Husband, Creator, God. Thank you for your love and care and for never letting me go.
Sent from my iPhone
Posted by Ronda@islandmother at 17:29 16 comments: 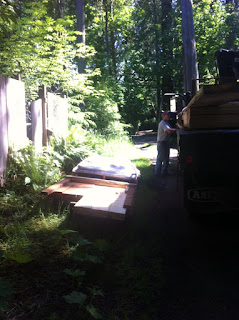 This is some lumber I ordered and had delivered outside my gate. I bought the lumber in town and paid a hefty price for there delivery truck to take it to the yard of the barge owner. He put it on his delivery truck and barged it across to the island and for another hefty price it arrived conveniently outside my gate. After it's arrival over several evenings after the little angel was fast asleep I began hauling it piece by piece to my front yard. There were two 6x6 eight foot long pressure treated posts that I packed in one at a time. They were heavy - and had an uncanny resemblance to each of the totes I push home in the wheelbarrow on town day. Then I had two 6x6 ten foot long pressure treated posts to haul and my gosh I struggled. The first I carried. Barely. The second I partly carried and then dragged. These posts left huge painful bruises on my arms. Later I began to wonder just how heavy they were so I looked online. I should have did this before - back when I was designing the woodshed. It was an oversight although I did check the weight on the bags of concrete. An eight foot post is 65 pounds and a ten footer is 81 pounds.
Sent from my iPhone
Posted by Ronda@islandmother at 18:57 13 comments: 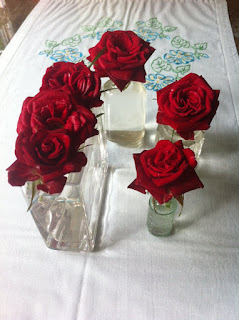 I took two quilts off the bed and I can forget about feeding the wood stove. It's hot outside and the northwesterly wind that usually feels cold is now refreshing. I feed off the long hours of daylight like a caterpillar on a leaf.
What is the simple life? If it's defined by a washing machine and running water than I don't have it.
I bought three miniature roses when they were marked down to 2.00 each at Walmart five or six years ago. They came looking dead but after I planted them they came to life and became these shrubby, little blooming bushes that furiously dance and cackle amongst themselves. Of course they never let me see them. It's all done behind my back and when I turn to look at them they are standing still but I hear their smothered giggle's. Have I arrived at middle age carefree from the expectations of other's only to be convinced that my roses are talking? "The quieter you become the more you can hear." Ram Dass
Sent from my iPhone
Posted by Ronda@islandmother at 17:29 6 comments:

Forest of Light #2 - a tapestry valance

Before my daughter was born I did a tapestry commission that got me interested in weaving something similar yet quite different. So when I finished that piece I wove this one. After I removed it from the loom I put the weaving away - unfinished.  I think most people who create do this at some point and while it can take a long time it has never taken me this long (4 years or so) to return to it. It's been very dry here but the other night when I heard the sweet sound of luscious raindrops on the roof I was brought back to the unfinished weaving. In the early morning light as the rain fell dream-like outside our windows and turned our world verdant shades of green I baked bread and a cake. I skipped my daily laundry chore and still in my pyjama's I took out the weaving and began to make the feeling a reality. I had a friend, F. who unexpectedly passed away shortly after I wove this piece. F. was a huge supporter of my weaving and my lifestyle and I was anxious to show F. this piece. But F. never saw it.  It's hard to explain the feelings the finished piece invoked when I stepped back after hanging it in my window. I know F. would have loved it; everything and the organic direction it was pulling me in. Forest of Light #2 is in my etsy shop now. My phone won't allow me to post a picture and a link so I'm posting the link to make it easier for you and I hope you will stop by to check it out.
https://www.etsy.com/shop/TheSingingLoom
Sent from my iPhone
Posted by Ronda@islandmother at 20:12 13 comments: