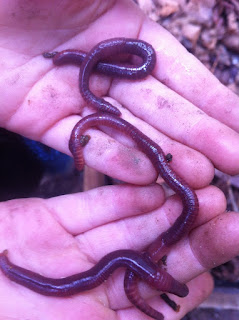 I first posted on our efforts of finding wild red wrigglers and the box I built to house them in on October 2, 2016. I left the box with the worms inside outside by the woodshed for the winter and hoped for the best. It was a cold winter and at times I wondered how the 140 plus worms we had found were doing. I waited until early spring before looking inside. When I lifted off the lid and smelled the rich aroma of earth I knew that the worms were doing fine. I left them with a large bucket of kitchen scraps and a small pail of cut up, soaked recycled paper. Apparently there are 700 - 800 breeding worms in a pound. (Breeding worms are the big ones with bands around them- they are in the picture.) I saw lots of breeding worms in our box - far more than what we had found last fall to put in. To me there is something incredibly beautiful about the sensuous rawness of nature's rhythms.

Sent from my iPhone
Posted by Ronda@islandmother at 19:57 9 comments:

At work in the forest 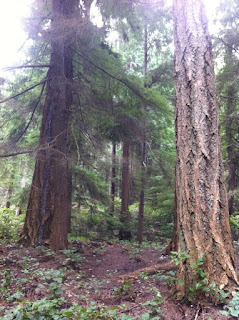 Some days all I hear is wind and the far off roar of the sea. When it is quiet I hear song sparrows, kinglets and robins. I rake and gather branches and cones shed from winter winds. This forest is my work place. I have worked here for years and it has shaped me in a way that is hard to define. I watch my young daughter gathering conifer cones and than she drops them into a red squirrel cache under a stump beside a large midden pile. I don't attend church but in this space I feel something far greater beyond myself and my work becomes sacred. My heart lifts toward my Creator in prayer and thanksgiving. Yet everything is not serene. I have a recurring shoulder injury that has reignited and many days I am not here. I know He hasn't brought me this far - only to abandon me. With a quiet, simple faith I wait to see where He is leading me.

Sent from my iPhone

Sent from my iPhone
Posted by Ronda@islandmother at 20:28 4 comments: